The fair devoted to bridal fashion will hold the biggest event in its history, focusing on creativity, talent and design as key innovation and internationalisation elements of the project, which will once again bring together the market’s leading companies from home and abroad at the fashion show and trade fair.

With the presence of 35 companies at the fashion shows and more than 429 brands at the trade fair, 74% of them international companies from 34 countries, Valmont Barcelona Bridal Fashion Week, organised by Fira de Barcelona, will establish itself as the flagship international event and the global epicentre of bridal fashion. Thus, the fashion shows at VBBFW 2019 will set the trends for the coming season, with more than 900 dresses on display throughout the four days of the fashion show. The trade fair will then follow, opening its gates between 26th and 28th April to exhibit more than 28,000 garments for brides and grooms, cocktail dresses and evening wear in Halls 1 and 2 of the Montjuïc venue at Plaza de España in the city centre.

Estermaria Laruccia, the event’s director, states: “Today VBBFW is fashion, design, business, vitality, a mixture of cultures and international transactions. It’s a catalyst of trends and a merger between tradition and innovation, it’s the stage on which the main figures in the international industry meet to display, sell, purchase and above all, explain the fashion that will arrive in the coming months to win women’s hearts all over the world”.

Marchesa, The Atelier and Zac Posen make their débuts at the event
In this regard, Valmont Barcelona Bridal Fashion Week will bring together the leading domestic and international companies and designers and, in addition to its more regulate exhibitors, it will welcome new brands taking part for the first time. These include Marchesa, the American brand founded by English designers Georgina Chapman and Keren Craig, The Atelier, one of the celebrities’ favourites when it comes to stepping onto red carpets around the world, a Malaysian company which, since 2017, has employed Jimmy Choo, the footwear expert, as the creative director of its bridal collections, and Zac Posen, the renowned US designer and one of the stars of Project Runway, the successful TV show, who will showcase the latest bridal, cocktail and evening wear creations from his ZAC Zac Posen line.

The trade show’s new entries include Americans Maggie Sottero and Mori Lee, Flora from Israel, Aire Barcelona, Fely Campo, Beba’s Closet, Sedomir Rodriguez de la Sierra and María Salas from Spain and the Bulgarian Julia Kontogruni. The exhibitors set to attend the trade fair for the first time include Sareh Nouri, Anne Barge, Casablanca and Savannah Miller, together with Italians Antonio Riva, one of the most prestigious global ambassadors of made in Italy fashion, Tosca, Maison Signore, Iris Noble and Valentini. As well as Sassi Holford from the United Kingdom, Flora from Israel and two new Australian brands: Rachel Gilbert and Leah Da Gloria, among many other firms from around the world.

The ELLE International Bridal Awards choose Barcelona
In the wake of the success of the last Elle International Bridal Awards, they will be held for the second consecutive year during VBBFW (Valmont Barcelona Bridal Fashion Week) at a ceremony in the evening of 27th April that will bring together designers, manufacturers, buyers, the media, digital influencers and operators from the industry in the Main Hall of the Historical Building of the University of Barcelona. Their aim is to consolidate and internationalise these awards that acknowledge excellence and creativity in the area of bridal fashion; they are organised by Elle, one of the largest networks in the world of fashion and lifestyle publications, with a presence in 46 countries. The winners in the 10 categories in 2018 included Carolina Herrera, Reem Acra, Viktor & Rolf Mariage, Carlo Pignatelli and Pronovias and Sophie et Voilà from Spain, among other companies.

Furthermore, in the evening of 23rd April VBBFW will give special recognition to journalist Jesús María Montes-Fernández, director of TVE’s Flash Moda programme, for his 25 years’ experience in the fashion world and, in particular, his constant support for the bridal industry.

Spanish bridal fashion consolidates its leadership
This year the fair will confirm its vocation as a hub for knowledge and the popularisation of the industry and present the study titled Millennial and Gen Z brides: the bridal fashion sector in 2020, written by IESE professor and fashion industry expert José Luis Nueno. According to the results of the report, the Spanish bridal dress sector is a leader in Europe and Spain is the second largest exporter in the world behind China. Alone it has a turnover of 860 million euros; if we add accessories, cocktail dresses, evening wear and footwear, the global turnover totals 1.35 billion euros, 105 million euros more than in 2016. The 730 companies that comprise it employ more than 13,400 people, who produced 841,489 wedding dresses in 2018, 11% more than in 2016. In addition, the data confirms the international dynamism of this area, which exports 74% of its production. The study also analyses the new consumption patterns established by Millennials and Gen Z, made up of people born since 1995. The two groups, digital natives who are constantly connected, are obliging the retail channel to evolve towards omni-channel.

VBBFW commits to design and innovation
For the first time VBBFW will take a step further in its commitment to design and innovation, which will feature not only on the catwalks and at the presentations of the collections, but also in all the areas that will host the different activities and events during this week devoted to bridal fashion. In this regard, The Reunión de Empresas de Diseño (Meeting of Design companies), or RED in its Spanish initials and VBBFW have joined forces to place value on design as a cultural vehicle and a driving force of innovation. The made in Spain design companies forming part of RED will provide decorative items such as lamps, furniture and textiles to create environments at VBBFW that convey creativity, charm and harmony, key factors in facilitating relationships, stimulating networking and promoting business. Furthermore, the IED (Istituto Europeo di Design) will deliver a workshop on innovation in the world of fashion at VBBFW, focusing on the merger between new technologies and artisan tradition when it comes to creating innovative fabrics and fashion items.

Valmont and the fair, a success partnership
VBBFW has changed its name this year as a result of a co-branding agreement with Valmont, the Swiss luxury cosmetic brand and one of the leading companies in the creation of beauty products. Under this partnership, the two key players, which share values such as creativity, art, innovation and beauty, will combine synergies so as to promote the bridal fashion industry, its internationalization and its reference platform. 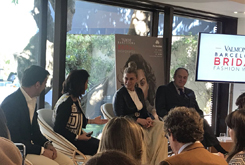 We make other contents available to press teams and digital influencers.

Download the logo and official poster
of the 2020 edition.

And what about our hosts, @renatazanchi and @javie

At the #BBFWGALA2021 we could see a lot of very fa

What would BBFW be without our brands and their fa

#BBFWGALA2021 is finally over. It has been such a