Barcelona Bridal Week is about to close the doors on its 24th edition organised by Fira de Barcelona that has managed to make this event the focus of attention of everyone interested in the wedding fashion sector. The quality of designs of the firms featured on the Gaudí Novias Catwalk and in Noviaespaña, but also the quality of national and international visitors and buyers, has reasserted Barcelona Bridal Week as a leading world event.

On Friday, the Gaudí Novias Catwalk ended and, today, it is the turn of the International Noviaespaña Show that, this evening, closes the doors on an edition distinguished by the quality of its trade visitors. 60% have been international, from 74 countries, 23% more states than the previous year. The largest numbers have come from Germany, the Russian Federation, USA, United Kingdom, Portugal and Brazil in that order.

The majority of visitors have been decision makers interested in purchasing outfits, accessories and articles “made in Spain”. These data ratify the success of one of textile’s most powerful sectors, which has firms that are now world leaders. In fact, Spain is the world’s second biggest exporter of wedding articles, behind China, making it one of the most powerful and solid sectors of the Spanish economy

According to the event’s Director, Miquel Serrano, “We are seeing a moderate optimism in the sector, so we are satisfied with the results, specifically on the international scene. We will keep on working along the same lines so that Spanish designers continue to captivate not only one out of every 10 brides worldwide but many more”.

The range of exhibits has been the most complete of recent editions. The event has occupied pavilion 2 in the Gran Via Exhibition Centre where around 10,000 bridal and over 2,500 cocktail outfits have been exhibited by 200 brands, 50% of them international from Germany, Belgium, France, United Kingdom, Italy, Lebanon, Portugal, South Korea, Poland, Turkey, Rumania, Colombia, Mexico and Brazil; and, for the first time has hosted the costume jewellery and fashion accessories show Eurobijoux & MIBI.

The Gaudí Novias Catwalk, which ended on Friday with the fashion show of Pronovias celebrating its 50th anniversary, was filled to capacity in the 19 shows in which the 22 designers showcased over 600 new creations that make up some of the world’s most relevant collections for 2015. The Catwalk of Barcelona Bridal Week has been, more than ever, the focus of international attention since, for the first time, over 10,000 people from 29 countries on the five continents, with Colombia at the head, followed by Italy, Mexico, United States, Brazil, Belgium, Germany Argentina, Indonesia and Russia have followed the fashion shows online.

With a few hours to go before it closes, it is estimated that around 16,000 visitors have attended Barcelona Bridal Week, establishing the Catalan event as the authentic global leader of the bridal universe.

The week dedicated to fashion for brides, grooms, parties and ceremonies will be back in Fira de Barcelona from May 5th to 10th 2015 to present the collections for 2016 of the big bridal fashion firms. 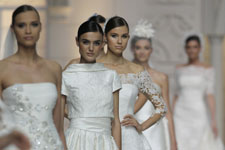 We make other contents available to press teams and digital influencers.

Download the logo and official poster
of the 2020 edition.

You experience it at the fair and on the networks

We use our own and third-party cookies to improve our services and show you advertising related to your preferences by analysing your browsing habits. If you continue to browse, we will consider that you agree to their use. You can change the settings or get more information here. Agree
Privacy & Cookies Policy

Any cookies that may not be particularly necessary for the website to function and is used specifically to collect user personal data via analytics, ads, other embedded contents are termed as non-necessary cookies. It is mandatory to procure user consent prior to running these cookies on your website.

ARE YOU READY FOR A DIGITAL REVOLUTION?

VBBFW presents the largest digital platform for bridal fashion to drive the future of the industry, keep the bridal market connected and support professionals and companies in the bridal community in their digital transformation to open up a new world of opportunities.

Do you want to generate new alliances between key industry players, promote your business internationally and connect your brand with the industry professionals and the global audience?