No winter lasts forever and no spring skips its turn. Let’s wait and see what it’s got for us.

This is the message that Brunello Cucinelli (Italian designer and entrepreneur) received from the employees of the Chinese boutiques of his brand and wanted to share on Instagram as a sign of hope and solidarity.

From China, where there have been no new cases of Covid-19 spreading for a few days, signs of recovery are coming with the reopening of luxury stores and the rebirth of the business. There are talks of revenge spending, a phenomenon fuelled above all by psychological factors, which will help the fashion sector to start again and not only in the Country of the Dragon.

In the meantime, however, the Fashion System does not stop and it provides funds for the health system and help initiatives for the people. Stylists, companies, foundations, and influencers have joined forces to fight the virus by donating funds, cancelling events and shows, closing shops, creating alliances to safeguard jobs or turning production over the creation of masks and gowns for healthcare personnel. This was also done by the Miroglio group, H&M, the THE-ARE brand, and the Spanish group Inditex (owner of Zara), along with ACME (Spanish Association of Fashion Creators), who put their logistical and managerial skills at the service of the country.

The United States (that recently entered into contact with Covid-19) is also gearing up. A coalition of textile companies and iconic clothing brands such as Fruits of the loom, Hanesbrands, Los Angeles Apparel, American Giant, Sanmar, etc. are helping with the production of 10 million masks to be destined for the US and Central America markets. Hedley & Bennet and Citizens of Humanity have already delivered thousands of masks, and the brands Prabal Gurung, St. John Knits, and Rachel Comey are purchasing materials and creating the models to get their facilities prepared.

Donations have been made by many companies around the world, including: Armani, Moncler, Dolce & Gabbana, Hermès, Bulgari, Prada, Versace, Benetton, Valentino, Pyer Moss, Ralph Lauren, and international brands such as Nike, LVMH, Richemont, Kering, and the Chinese multinational Alibaba. In addition, a percentage of the sales of Vestiaire Collective, Kidult, Manila Grace, Kukhareva London, Rixo, Kenneth Cole, Zadig & Voltaire, Three Graces London, the French Sézane, and many others will be donated.

In the Bridal industry, the Pronovias Group will donate the new 2020 collection wedding dresses to all hospital employees that are at the forefront of the fight against the virus and about to get married. New York designer Brandon Maxwell has also announced that he will donate three dresses to the brides affected by the crisis and, in the meantime, he is also making masks. Michael Costello is trying to recruit other designers (including Ashton Michael, Michael Ngo, and Bryan Hearns) in an attempt to make 20,000 masks, and has offered to send a template and a list of materials to anyone who wants to help from home. 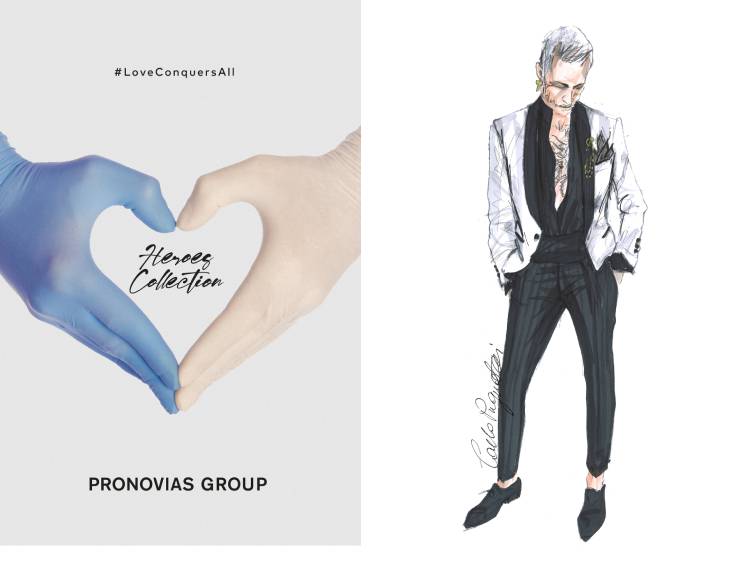 Designer Carlo Pignatelli has joined the Charity Stars initiative, auctioning the tuxedo worn bysinger Achille Lauro at the San Remo Festival to donate the proceeds. The Calzedonia group, owner of the brand Atelier Emé has adapted some of its factories for the production of sanitary clothing.

The mobilisation of the fashion world (which had already shown an active participation in the first signs of contagion in China) is not stopping and is now, more than ever, committed to providing tangible support in the battle against Covid-19. The union, collaboration, and solidarity of these many companies and designers gives hope to the sector that we can and we must start again.