The originality and exclusivity of the wedding party is not limited to the reception, the choice of venue, the decoration, or the menu, but it extends to the wedding dress and accessories such as the shoes, the veil, and the jewellery.

More and more women are choosing a dress that has something unique and particular that represents them or tells their story in some way. It is a trend born a few years ago and well known thanks to famous brides, like actresses, princesses, and influencers who have appreciated it and made it popular.

One of the first ones was Angelina Jolie, who chose for her wedding with Brad Pitt in 2014 to have Luigi Massi (master tailor with the Atelier Versace) embroider her veil and the back of her skirt with designs made by her 6 children. 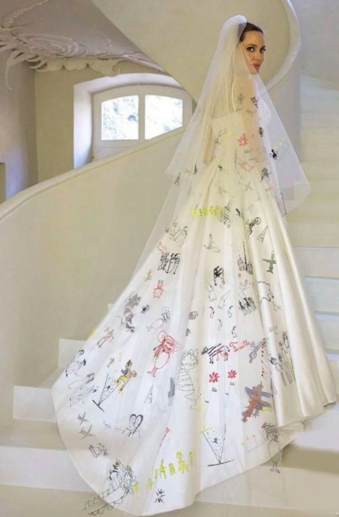 The veil had a leading role also for Meghan Markle, who wanted to pay tribute to the Commonwealth by embroidering a series of flowers along the edge, one for each of the 53 States and the wintersweet (which grows in front of the Kensington Palace cottage) and the Californian poppy (honouring her country). She also asked Givenchy designer Clara Waight Keller to have a small piece of blue fabric from the dress that the Duchess of Sussex wore on her first date with Prince Harry.
A romantic detail that was later revealed.

The lace worn by Kate Middleton also tells a story. Rumour has it that the embroiderers (changing needles every 3 hours and washing their hands every half hour) followed a technique called ‘Carrickmacross’ which includes the symbols of the countries in the United Kingdom in the decorations: the rose for England, the thistle for Scotland, the narcissus for Wales, and the clover for Northern Ireland, thus sealing the role of the future queen.

On the tulle and the organza of one of Chiara Ferragni‘s dresses, it seems that the influencer wanted to quote some lines of a love song (that her rapper husband dedicated to her), a lion cub (in tribute to her son) and finally, on the shoulder straps, instead of the Maison Dior logo, the wedding date.

For accessories, Beatrice Borromeo chose a clutch by Edie Parker with the word Mrs. Casiraghi and Hedi Slimane, creative director of Celine, gave the Bieber couple two leather jackets with the words ‘Husband’ and ‘Wife’ hand embroidered with chrome studs.
The dress of the bride, Hailey Baldwin, was customised for her by Virgil Abloh, Off-White designer, with the writing ‘Til Death Do Us Part’ embroidered on the train and on the 4-meter veil.